This post will explore eggs in ice cream. We will examine five different ice creams made with 0, 2, 4, 6 and 8 egg yolks. These ice creams has been balanced to have approximately the same Total Fat 15%, Total Solids 42%, Serving Temp -15C/5F, Sweetness POD 175 and MSNF/Water 15%. This means the ice creams are very similar. What is different is of course the fat composition, the 0-egg ice cream has all the fat from the milk and cream and the egg ice creams have some of the fat from the eggs. The eggs also contribute emulsifiers and stabilization. So for the 0-egg ice cream we add some emulsifier in the form of soy-lecithin. We also decrease the stabilizers as we use more eggs.

The recipe is a standard base recipe using Milk, Cream, Skim Milk Powder, Sucrose, Dextrose, Egg yolk and Stabilizer. This recipe is then balanced to have the same properties.

As egg yolks are the most common emulsifier in home made ice cream I will try to explain why we need emulsifiers in the first place.
An emulsion is a mixture of two liquids that normally does not mix. In the case of ice cream we have a fat in water emulsion. Milk and cream are already emulsions, milk fat is suspended in water and the protein (casein) in the milk acts as an emulsifier. Homogenized milk or cream are stable emulsions, this means they will not separate during storage. If the milk is not homogenized the fat will separate and create a layer on top.
When making ice cream the dasher in the ice cream machine will whip the mix to create a foam network of fat and proteins that traps air bubbles. What happens is that the fat droplets collide and join together and forms a network that holds the air.
Ice cream actually does not have enough fat to be whipped effectively. To whip cream, for example, the cream needs to have a fat content of at least 30%. If the fat content is lower it doesn’t work. Ice cream has a fat content much lower than 30%, so how can we whip air into our ice cream?
Milk and cream are actually too stable emulsions. So, we add an emulsifier to destabilize the milk fat emulsion. Some of the proteins in the milk will be displaced by the added emulsifier making the milk and cream a less stable emulsion. This destabilized emulsion can now partially coalesce in the ice cream machine and create the foam network needed to trap the air.
So, the bottom line is we add an emulsifier to our ice cream to weaken or destabilize the milk/cream emulsion in a controlled way to be able to whip it in the machine.

Here are three much more detailed posts on emulsifiers that you can read.
https://under-belly.org/ice-cream-emulsifiers/
https://www.dreamscoops.com/ice-cream-science/using-emulsifiers-ice-cream/
http://icecreamscience.com/why-are-emulsifiers-used-in-ice-cream/

Eggs yolks contain Lecithin that is a good emulsifier. Egg yolks can also work as a stabilizer thickening the ice cream mix. They also add fat, water and of course flavor.
One large egg yolk contains 1.5g Lecithin and to get emulsification we need 0.5-1% of the mix to be egg yolk. So, in a 1 Kg mix you will only need 1/4 to 1/2 egg yolk.
To get some of the thickening effect from the egg yolks you need 3-4%. So, 1.5 to 2 egg yolks per Kg mix. Also note that the mix has to be heated for the thickening to occur when using egg yolks.

I usually use two egg yolks as an emulsifier in my ice cream and maybe 4-6 if I want a custard ice cream. Using just 1-2 egg yolks will give you your emulsifier but you will not really be able to taste any eggy or custard flavor. For thickening I usually rely on other stabilizers.

The viscosity of the mixes increased with the number of egg yolks. This is of course expected as the more egg yolks we add the more thickening we get.

Note! The ice creams has the same fat% and total solids so the overrun is most likely related to the amount of emulsifier and viscosity and not to total solids. 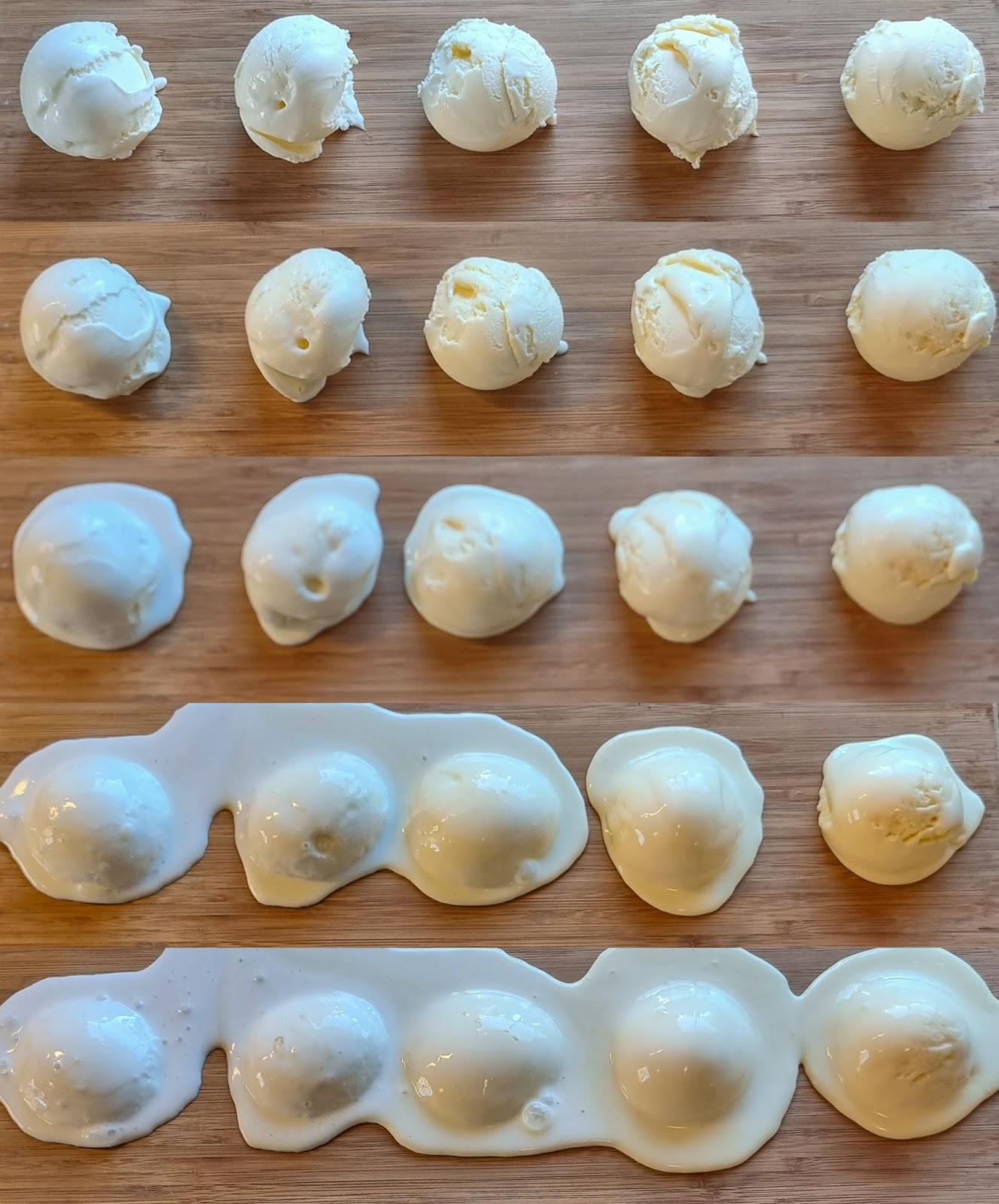 All mixes were cooked to 85C/185F, chilled in ice water and aged for 6 hours. Churned in a Musso Stella 5030. Also, I don’t temper the egg yolks but instead just mix the milk, cream and egg yolks and add the well mixed dry ingredients using a hand blender to mix everything. This mix is then heated to 85C stirring all the time. I heated my mix in my Cecotec blender (Thermomix replica).

One thing I did this time was to remove the skin from the egg yolks before cooking. A comment on another of my posts suggested that some of the bad eggy taste was due to the egg yolk skin. So, this time I separated 20+ egg yolks and strained them through a fine sieve before adding the correct weight to each mix. I’m not sure this makes a huge difference but even the 8-egg yolk ice cream did not have a too eggy taste. I think it’s more important to not overcook the mix or cook it too long on high temperatures. But this is something you can test the next time you use egg yolks.

All ice creams have a good texture and taste. In a blind tasting the 6-egg ice cream was declared the winner, but it was very close. The 0-egg and 8-egg came in last.
There is no right answer how many egg yolks to use. It depends on the flavor you are making and personal taste. If using no eggs or very few eggs you should make sure you add some other emulsifier and that you add enough stabilizer/thickener to get the correct viscosity.

11 thoughts on “Eggs in ice cream”